Expanding its Originals portfolio, Nokia recently launched the Nokia 5310 in India. It is a music-centric feature phone that aims to recreate the brand’s decade-old Nokia 5310 Xpress Music phone.

Is the Nokia 5310 a genuinely musical feature phone or is it merely selling nostalgia? Let’s find out:

The Nokia 5310 does not look anything like the petite Nokia 5310 Xpress Music, but that’s in a good way. It has a touch of novelty, like all other phones Nokia has launched under its Originals series. Made of plastic, the phone is sturdy and has great ergonomics. It is 13.1 mm thick and weighs 88.2 g, both these metrics make it a pocket-sized phone.

The Nokia 5310 comes in black and white colours, with red coloured strips running down the chassis along the display. There are music controls on the right and volume controls on the left side. On the front, the phone has prominent wide cut-out areas on the forehead and chin, each with a speaker for audio output. The forehead speaker also doubles up as an earpiece for calls, and the chin speaker has a microphone. There is a 2.4-inch display covering the top half of the phone, and an alpha-numeric keypad with D-pad for navigation, call buttons, option key and back key covering the bottom half. On the top, there is a 3.5mm audio out port and a microUSB charging port. The back side features the phone’s camera and LED flash, along with a glossy Nokia branding, which is the only thing on the phone that shines on its matte-textured construction. The back cover is removable and underneath are dualSIM slots (full size) and a microSD card slot. Unfortunately, the SIM slots are not hot-swappable and one has to remove the battery to change the SIMs. Thankfully, this is not the case with the microSD card.

The Nokia 5310 has a 2.4-inch TFT screen of a 240×320 pixel resolution, which is decent for a feature phone. It supports a Glance feature, which Nokia smartphones come with, to show time and battery indicator on the lock screen. However, it is not an always-on mode, so you need to press a key on the lock screen to wake up the Glance screen. There is not much to customise here except brightness, wallpapers, font size and notifications settings. 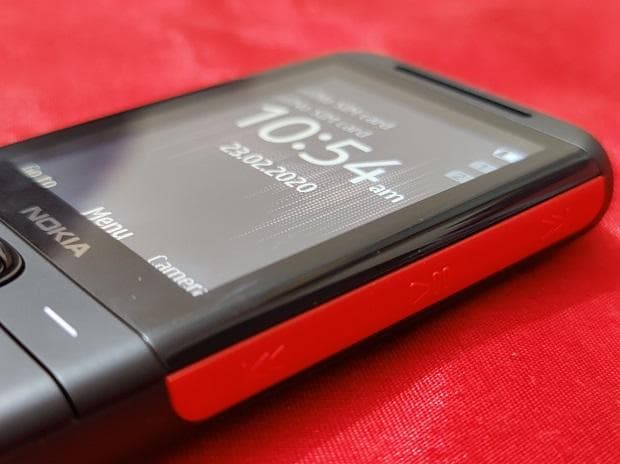 With regard to usability, the display is decently lit to stay legible in most environments. However, the lack of auto-brightness might put some off. As for the contrast and colours, the screen seems decent and in line with phone’s feature phone moniker.

The Nokia 5310 is a versatile music-centric feature phone with a music player, FM radio, dual speakers, and all-round connectivity options. Like most other things, the music player and FM radio have basic features. However, the dedicated volume and control buttons make it easy to operate them. Moreover, unlike most phones with FM radio, the Nokia 5310 does not require wired headsets to scan channels and play radio stations.

In terms of audio quality, the speakers are loud and seem to have a balanced stereo output. Crosstalk is an issue, but it might be ignored, considering the phone’s affordable price tag. The audio quality through wired and wireless earphones is good, too. It is loud, clear and has a good stereo feedback.

The Nokia 5310 is powered by the MediaTek 6260A chip, paired with 8MB RAM and 16MB internal storage. Though these specs might seem weak in the era of heavy-duty sartphones, they are more than good for a feature phone. With these specs, the Nokia 5310 delivers a stellar performance. The phone ships with the Nokia Series 30 operating system, which is designed for basic feature phones. The OS has a native app store, but the selection of apps is limited and quintessential. As for connectivity, there is 2G data support and the phone has a built-in browser for internet access. However, it seems to be there more to add novelty to the overall package than improve its utility. Similarly, the phone has a VGA camera, which is a good add-on. But do not expect a miracle here. Priced at Rs 3,399, the Nokia 5310 invokes right amount of nostalgia while keeping true to the pitch of a music-centric feature phone that does not compromise on utility, features and performance. It makes a good deal for someone looking for a feature-rich feature phone from a reputable brand. It also makes a good alternative to expensive music players — that is, if you can do without compatibility with audio streaming services.